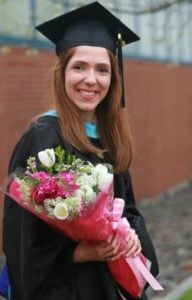 When Dr. Yalda Kaveh arrived in Maine a few days after immigrating from her homeland of Iran, she found scenic views covered in white by December snow and a home away from home.

“My husband and I came to the United States for grad school and ended up staying,” she said. “We applied to six or seven universities all over the country. We heard about the University of Southern Maine through a friend of his who had a relative who worked in the system.”

“I lived close to the USM campus, so I walked to class,” she said. “I was still brand new to the United States when I took EDU 559: Aspects of Reading for Multilingual Learners with Dr. Alec Lapidus, who was also my adviser.

“At the time, Iran was going through severe sanctions. Dr. Lapidus got me a research assistantship to cover half of my tuition. He was a tremendous help to me.”

Another USM professor, Dr. Andrea Stairs-Davenport, guided Dr. Kaveh to the Ph.D. in Curriculum and Instruction program at Boston College after she graduated. Now, Dr. Kaveh is an assistant professor of bilingual education at Arizona State University.

Though she took classes with a few other professors, Dr. Stairs-Davenport and Dr. Lapidus became family — especially since Dr. Kaveh was still new to the country and learning her way around. “They were super supportive — academically and personally,” she said.

Dr. Kaveh was born and raised in Isfahan, Iran, where she graduated with a bachelor’s degree in English translation from the University of Isfahan in 2010. She taught English as a foreign language and Persian for four years before coming to the United States.

“I was studying English in college, but I started learning it when I was 10 years old,” she said. “I was already pretty good at it when I got to college. It was like a side job I started as an undergrad when I taught at a language institute afterschool program. I was 19.”

“In the Aspects of Reading for Multilingual Learners class, we did an autoethnography and reflected on our journey as people, as well as professionals and teachers,” she said. “Dr. Lapidus, one of my classmates named Mamiko Hirano and I all wrote a paper that was published in the L2 Journal.

“Dr. Lapidus encouraged us to publish as master’s degree students.”

EDU 635: Seminar in Second Language Literacy, taught by Dr. Stairs-Davenport, was another one of Dr. Kaveh’s favorite courses in the master’s degree program. The two carpooled to the in-person class in Lewiston, strengthening the bond between them.

“In that class, I did a research project on Iranian families in Maine and a family I knew in London. It formed an interest in me in family language policy, which is a huge part of the work that I do now.”

From Husky to Sun Devil

Although Dr. Kaveh misses the milder temperatures, the New England countryside and the friends she made at USM, she is thrilled to be teaching at the college level and paying it forward to her students. She is entering her third year in the Mary Lou Fulton Teachers College at ASU.

“Given that I was into bilingualism and bilingualism in children of immigrants, I wasn’t thinking about curriculum and instruction. I would have never looked at that program, but because Dr. Stairs-Davenport had been through it, she told me about the program and Dr. Maria Estela Brisk at Boston College.”

Dr. Kaveh walked the graduation stage at the USM commencement ceremony to celebrate her major accomplishment while her husband, friends and close faculty members cheered her on.

“Graduation day was a lot of fun,” she said. “My family and friends were excited for me. I am a first-generation college student. I got more than I expected out of the master’s degree program. I had a great experience at USM.”

4 Career Options for Master's in TESOL Graduates
Because English literacy is a necessity for many children and adults all over the world, Teaching English to Speakers of Other Languages (TESOL) can be…
Read more
Dr. Andrea Stairs-Davenport Ramps up Online Programs for USM School of Education and Human Development
Dr. Andrea Stairs-Davenport spent the first several years of her career teaching across the country, but her home state of Maine was never far from…
Read more
New Technology in the ESL Classroom
The repercussions virtual reality (VR) and augmented reality (AR) have had on language learning are difficult to overstate. At a time when Google’s Pixel Buds…
Read more
Earn an Online Master's in TESOL in 10 Months
Educators who are qualified to teach English as a Second Language (ESL) are in high demand at all levels of education, from preschool into adulthood.…
Read more
Beth Cote Achieves Career Goal After Earning Master's Degree in Education
After Beth Cote completed a mentorship program through a high school Spanish class, she immediately set her sights on becoming an English Language Learner (ELL)…
Read more
TESOL's 6 Principles for Teaching English Learners
In 1964, the Association of Teachers of English as a Second Language, now known as TESOL International Association “was created out of professional concern over…
Read more
What Is an MS in Education – TESOL?
Teaching English to Speakers of Other Languages, or TESOL, encompasses what used to be called TEFL (Teaching English as a Foreign Language) which emphasized teaching…
Read more
Have a question or concern about this article? Please contact us.